Events, sports and activities for all tastes, gastronomy and culture. If you decide to spend a weekend or your holidays in Madesimo, the mountain town located in Valle Spluga which is part of the Valchiavenna Ski Area, you will surely find a way to keep busy and have fun. Let’s see in detail 10 things to do in Madesimo and its surroundings to spend a wonderful holiday during the winter season!

Read also 10 things to do in Bormio!

Discover the best 10 things to do in Madesimo:

Skiing in the Valchiavenna ski area

Let’s start immediately from sport, since skiing is the main activity that makes Madesimo known today. Skiers, in fact, can enjoy themselves in a very large ski area, which also extends in the municipality of Campodolcino, in the hamlet of Motta and in Val di Lei (with a breathtaking view of the lake of the same name). The Valchiavenna Ski Area offers 60 km of downhill slopes and the Madepark, the Madeismo snowpark in the Acquarela area. Also innovative is the way to reach the downhill slopes, i.e. through the Sky Express, a funicular that covers seven hundred meters of altitude difference in just seven minutes. To try, even for those who do not intend to put boots on their feet: book your Madesimo skipass now and avoid the queues at the cash desk to buy the ski pass. Get off the Madesimo Canalone

If you’re an expert skier, you can’t miss the almost 3 km and 1000 meters of descent, with a gradient, to say the least, that connects Pizzo Groppera to Pian dei Larici. This is the Canalone, a very well known off-piste, partly because of its difficulty, partly because it has been declared one of the best off-piste in Italy. It used to be a full-fledged track, then it was closed for safety reasons and became a destination for off-piste skiing in Madesimo, it is often traced, but obviously it is not beaten! It is important to remember all the equipment you need for off-piste skiing when you tackle these trails.

The Canalone di Madesimo is not the classic off-piste fresh snow, in fact it is very often traced by skiers, it is characterized by high humps that make it a particularly difficult route and suitable only for more experienced skiers with adequate preparation. The initial wall is the most challenging, very often in the shade. Afterwards, steeper sections alternate with less strenuous ones until it narrows, this is where the name “gully” comes from. The narrowest section is the one that creates the most difficulty and after a fairly long wall it ends in a false plain that leads to Alpe Larici.

With the support of Masters and Mountain Guides you can tackle numerous freeride routes outside the Canalone, such as the Angeloga tour. Take a snowmobile excursion to Madesimo

In addition to skiing, an experience not to be missed in Madesimo are the snowmobile excursions. There are, in fact, routes designed specifically to be crossed by these vehicles: you can reach the Spluga Pass, reach the Black Lake and much more. If you feel like it, you can drive the snowmobile yourself! Some huts and restaurants at high altitude offer the organization of dinners with snowcat and snowmobile transport.

Madesimo has a wide range of outdoor activities during the winter season, but also in summer. All you have to do is choose the snow sport you prefer in addition to skiing or snowboarding and “experiment”, there is no shortage of activities in Madesimo: Visit the Via Spluga museum

If you want to know a bit of history of the place, the museum located in a sixteenth century building in Campodolcino could be for you. Inside the Via Spluga museum you will find exhibitions about traditional crafts, games of tradition, women’s work and, finally, the whole commercial history of the valley. A gem if you want to know more about the place where you are spending your holidays!

The landscape around Madesimo is truly spectacular, with untouched valleys, alpine lakes, passes and passes, connections to Switzerland, but let’s go in order and see which are some of the most interesting routes.

We start from the Niemet pass, an Alpine pass that connects Madesimo to Switzerland. It’s a very famous and fascinating alpine hike, so if you are an expert and love climbs and, above all, immaculate descents, we recommend this route!

The Andossi area, on the other hand, is ideal for snowshoeing, even with heavy snow conditions, and represents the area that divides the Spluga Valley. The name derives from the natural waves that are created on the plateau and has a beaten path for snowshoes that can be covered in about 1 hour with a very suggestive view.

Other marked trails for snowshoes, but also for summer walks are those of Cardinello, from Isola to Monte Spluga, the path of Borgetto, above Isola, the walk to Angeloga, the walk to the Bertacchi refuge and the not-to-be-missed Lago Azzurro which dries in winter and is a fantastic destination for an outdoor picnic even in summer.

Madesimo is also home to many alpine pastures on the Andossi and at the Groppera where you can watch the milking. Also the alpine garden of Valcava is beautiful.

For those who love hiking at night there are a series of events and excursions organized at Chia Luna.

Try the restaurants in Madesimo

The gastronomic scenery of Valchiavenna, like that of many mountain areas, is rich and interesting for lovers of cooking!

Foil cake. Bresaola. Cheese produced in the mountain pastures. Grappa from Valle San Giacomo. Are your mouths watering already? What if I told you that it is possible to taste all these typical delicacies of the valley at high altitude, with a dinner in a mountain hut? The Mai Tardi refuge offers typical dinners with local products.

Other places to eat in Madesimo are the restaurants: Dogana Veglia, Osteria Vegia, Capriolo, Posta and Cantinone.

Read also Dinners in a cabin: which are the best!

Have fun at Baby Park Larici

Since children are always at the centre of our interest, we also recommend a few places to let the little ones have fun. And what could be better for them than a playground in the snow? If you take the cable car from Madesimo, you will arrive comfortably at the baby park, located near a refreshment point. You will find a treadmill and a slope where the children can have fun with bobsleighs, toboggans and inflatables and/or try their first experience on skis. For the latter, don’t be caught unprepared and book your ski instructor! Take part in the nightlife

Madesimo may not have an extremely lively nightlife, but it offers various ways to have fun even after a day on the slopes. In recent years the trend of night skiing has developed, which is also practicable in Madesimo. In addition, the life of the resort continues between events with music on the slopes and apres-ski in the clubs of the centre. The centre of Madesimo deserves a walk in the afternoon with its markets and illuminated ice waterfall.

The tenth piece of advice is at the end of the day. Actually, it can also apply for a whole day, that’s up to you! In Madesimo it is, in fact, possible to enrich your holiday with various wellness experiences: whirlpools, Turkish bath, sauna and sensory experiences. You are already imagining your immersion in warm water after a day in the snow, aren’t you?

For those arriving from the cities on their way back, we recommend a stop at the Agriturismo la Fiorida, an alpine bueaty farm with swimming pool, whirlpool, sauna, vitarium, Turkish bath, aromatic and emotional showers, herbal tea area, relaxation area, fitness room, outdoor solarium. Ideal for a moment of wellness and a last contact with the mountain before returning home. The entrance can be easily booked online on Snowit.

Book now a day of wellness in Madesimo with Snowit 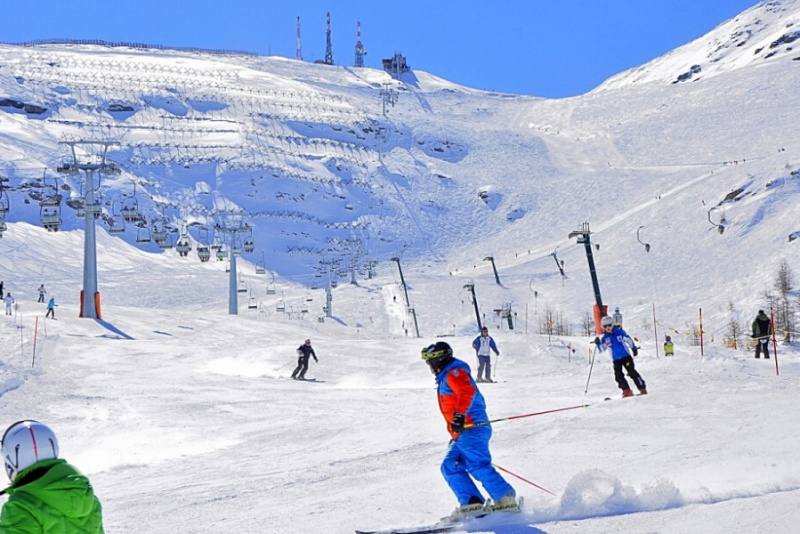 10 things to do in Gressoney