It’s true, slopes and lengths are crucial for choosing the right ski slope for us, but the eye also wants its share! Skiing in a wonderful setting is definitely an added value for our skiing day. In this article we wanted to draw up a ranking of what we believe are the 10 most beautiful ski slopes in Italy.

Find out which are the 10 most beautiful ski slopes in Italy:

The Stelvio di Bormio slope is considered one of the most spectacular and technical slopes in the world. It has hosted the Alpine Ski World Cup several times. It is 3200m long and has a difference in altitude of almost 1000m, with a gradient of up to 60%.

It starts at 2250m with an incredible view of all the Alps, and descends immediately at great speed with very challenging curves that lead to a forest of Swiss stone pine, pine and fir trees. Going down you reach the most spectacular and decisive diagonal of the route that leads to the meadows of Ciuk. A jump just before the finish line takes us to the village of Bormio, which is clearly visible from above for most of the track.

All the champions have skied on this beautiful slope, what are you waiting for?

Discover which are the 5 longest ski slopes in Italy. 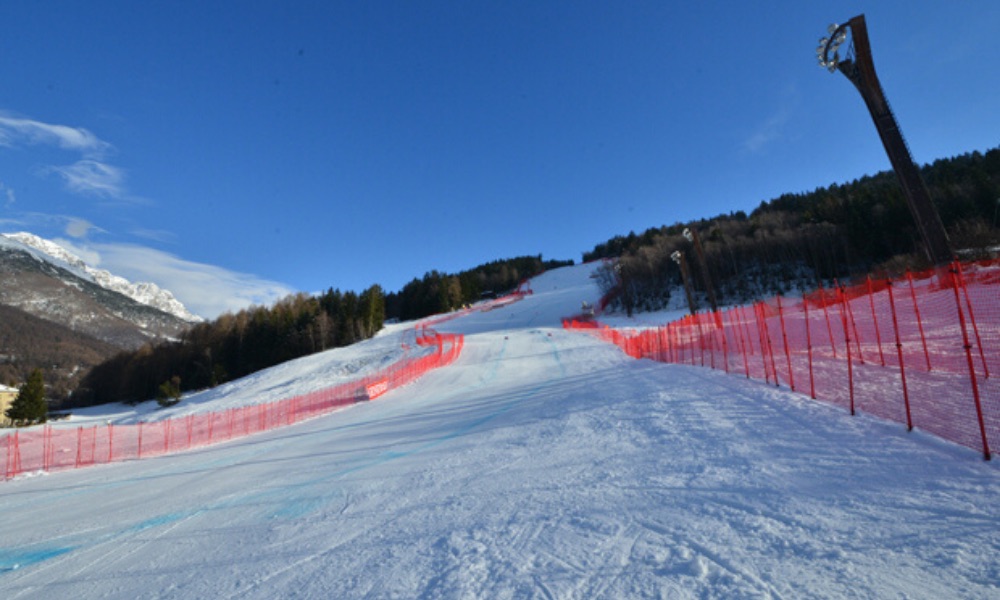 It has been elected by the magazine “Sci” as the most beautiful slope in the Alps and remains, for years now, the most popular slope for those who prefer challenging slopes. It descends with continuous changes of rhythm, cut in a wood of centuries-old Cimbrian trees and with excellent night lighting, is in fact considered one of the best night skiing slopes. It is approved for international competitions but unfortunately it is not connected to the rest of the Monterosa Ski area.

Discover which are the 5 most difficult ski slopes in Italy. 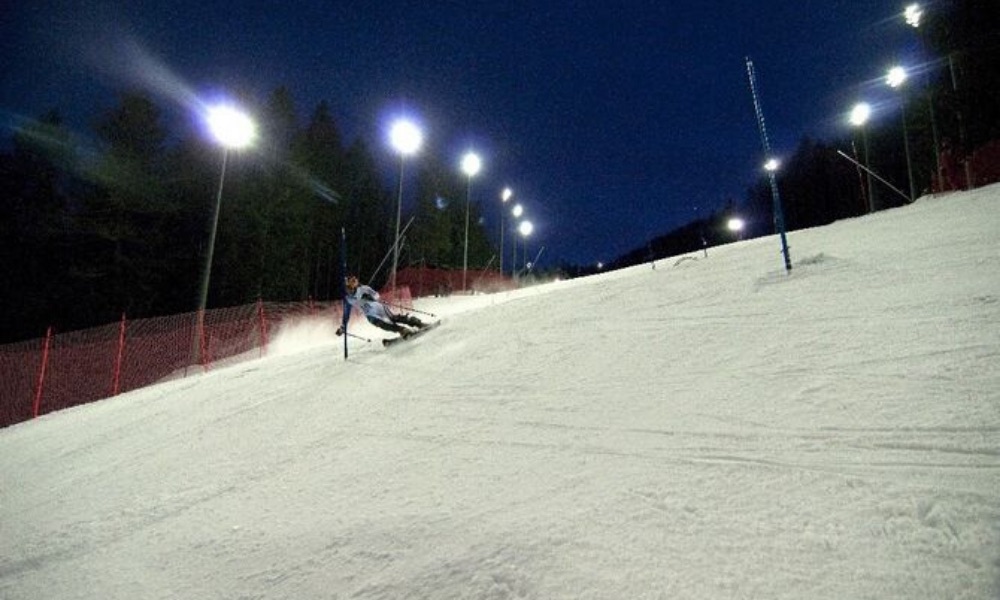 Besides being one of the most scenic slopes in Italy, it is also one of the most difficult. Located in the district of La Thuile, it has a length of 3.8km, an altitude difference of almost 900m and a gradient that reaches 73%. With artificial snow, you can cover almost the entire route in the shade except for the final section. It is a track full of walls that follow one after the other, but, developing entirely within a forest, it offers priceless and magical sensations.

Don’t you trust our righteousness? Go to La Thuile and try it, you won’t be disappointed! 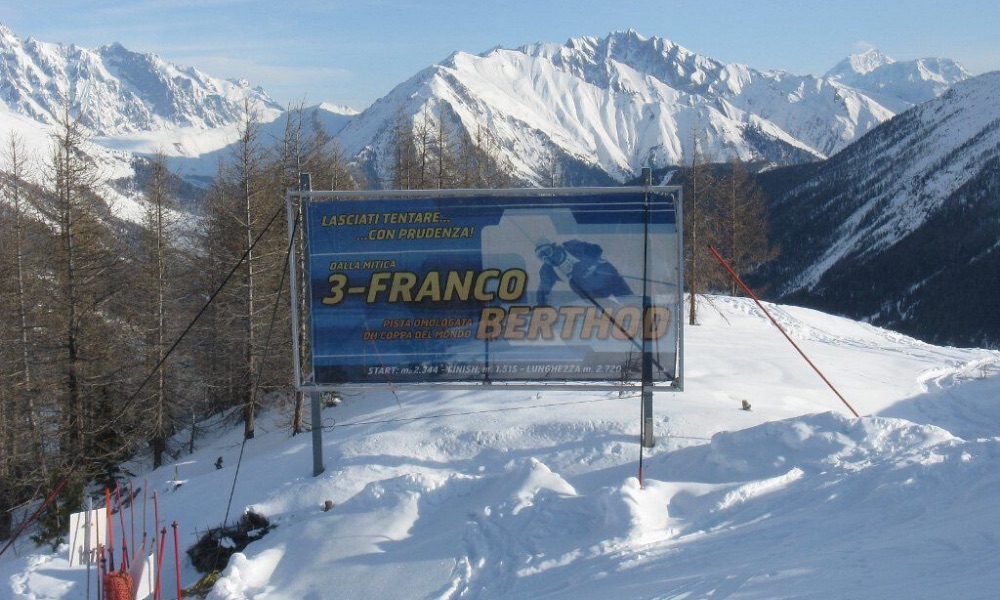 The Giorgio Rocca track is a recent track in Livigno and was dedicated to the great champion Livignasco who with his 11 victories in the Slalom World Cup and the conquest of the Crystal Cup in the specialty could only be included in our ranking.

The Giorgio Rocca slope is part of the Mottolino area, where it is number 26 and is a black slope that starts at 2386 meters above sea level and is about 1400 meters long for a difference in altitude of 450 meters. 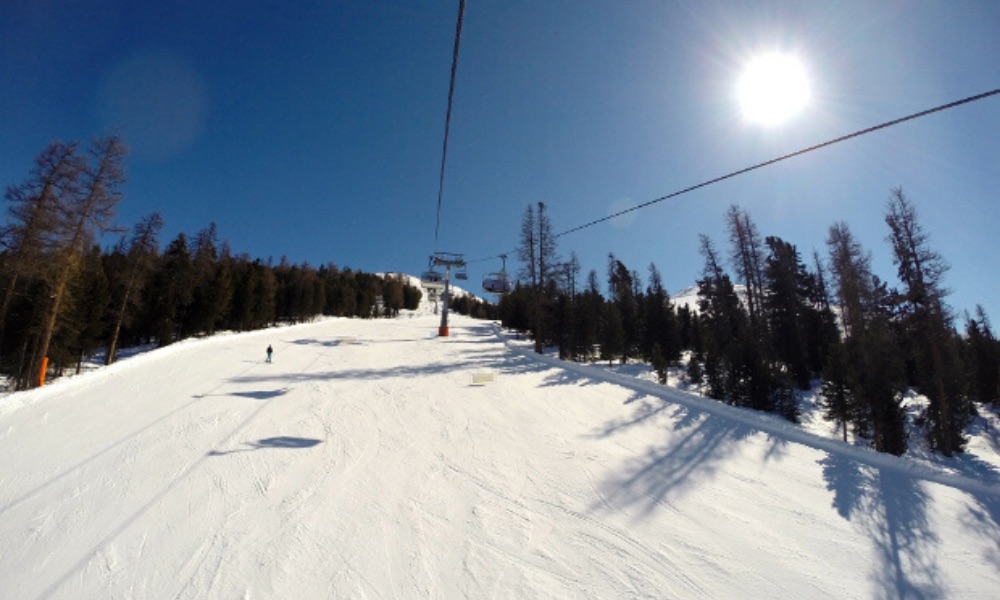 A downhill track in Sestriere, in the Via Lattea area. It starts from the 2,800 metres of Mount Motta and takes you on a winding route with breathtaking curves and walls to the village of Sestriere. Initially the route is very wide, until you reach the forest which has a particularly varied itinerary. This slope is the scene of the World Cup downhill and ideal for expert skiers who will have fun on the initial wall with a fantastic alpine landscape.

The Ventina di Breuil Cervinia is an 11 km long slope with a difference in altitude of 1,500 metres. It starts from the Plateu Rosa glacier, on the border with Switzerland, at an altitude of 3,500 meters and reaches the 2,050 meters of the town of Cervinia. The trail runs through a unique landscape in front of Mont Blanc, the Matterhorn and the Gran Paradiso. It is certainly the most famous slope of Breuil-Cervinia Valtournenche, wide, panoramic, not too demanding (it is a red slope), ideal for everyone! 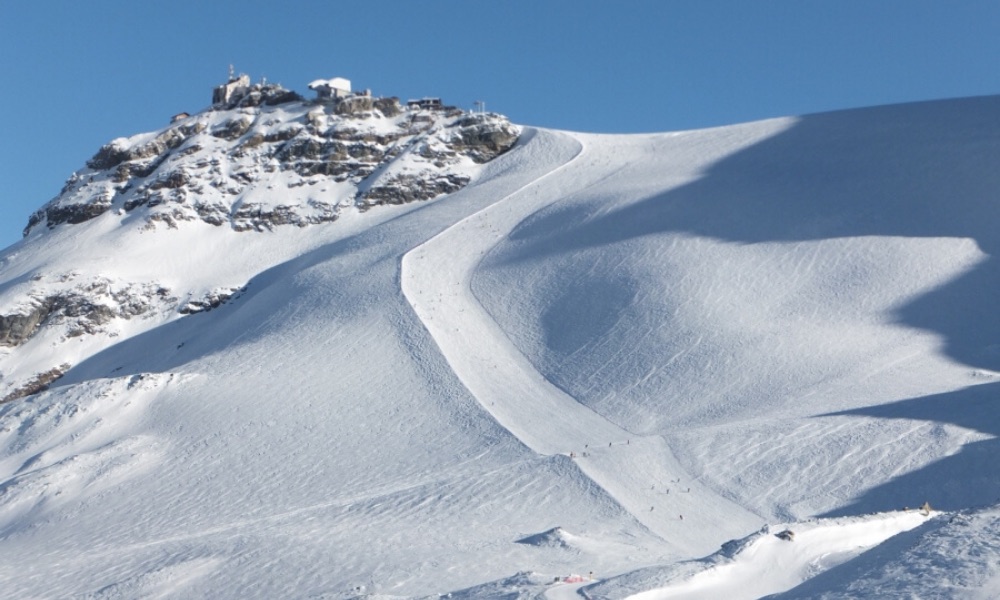 Cortina, the pearl of the Belluno Dolomites, is not only famous for its nightlife, but also for its spectacular ski slopes that wind through the peaks of Monte Cristallo and Tofane. The Olimpia delle Tofane is one of these, a track at the foot of the massif of the same name, which is very popular with Kristian Ghedina from Ampezzo. The Olimpia delle Tofane starts from the Pomedes refuge at an altitude of 2,300 metres, alternating between fast and steep stretches and other flatter ones, until it reaches the two large rocks between which the track is set, which make it particularly famous and steep. It is also known as the sun trail, as it is covered by very few stretches of shade. The track then flattens out in a plateau and then begins to descend again into the woods with other small walls. 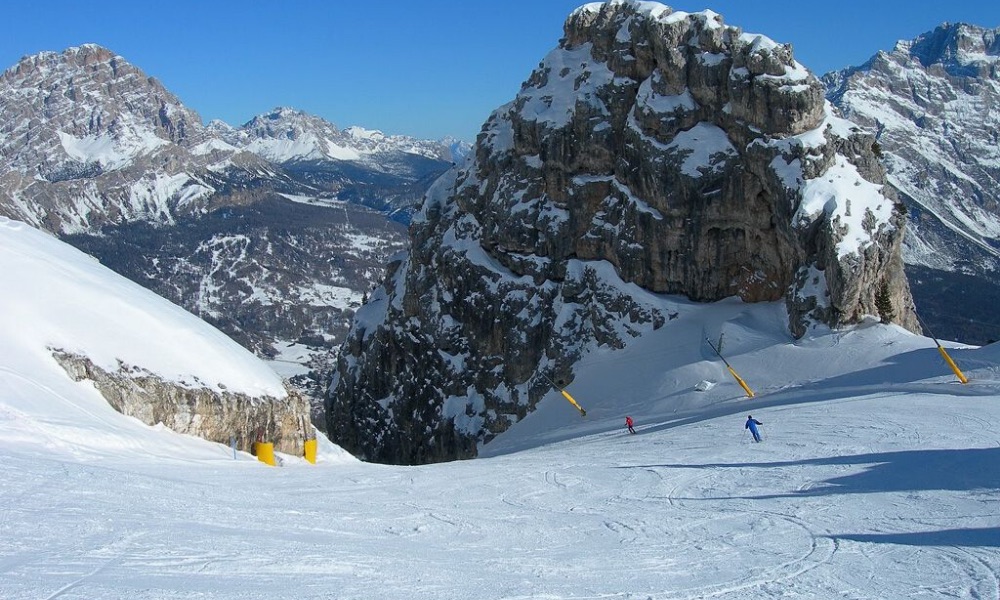 The Gran Risa, protagonist of the men’s World Cup giant, is the queen slope of the Dolomiti Superski, a slope lucky for the great Alberto Tomba who placed himself in first position several times. It starts from the more than 2,000 meters of Piz La Ila and in 650 meters of altitude difference you reach the village of La Villa. For those who want to do it, but do not feel like an expert skier, there is also an easier variant (on the right). The slope is immersed in a beautiful conifer forest and is 1,200 metres long.

We are still in the Dolomites, still on a World Cup slope and we are talking about downhill. The famous Saslong, in Santa Cristina in Val Gardena, starts at 2,250 metres and goes down to the heart of the village. A descent of pure adrenaline, very steep and with a series of vertical walls that allow you to take speed to the most experienced. 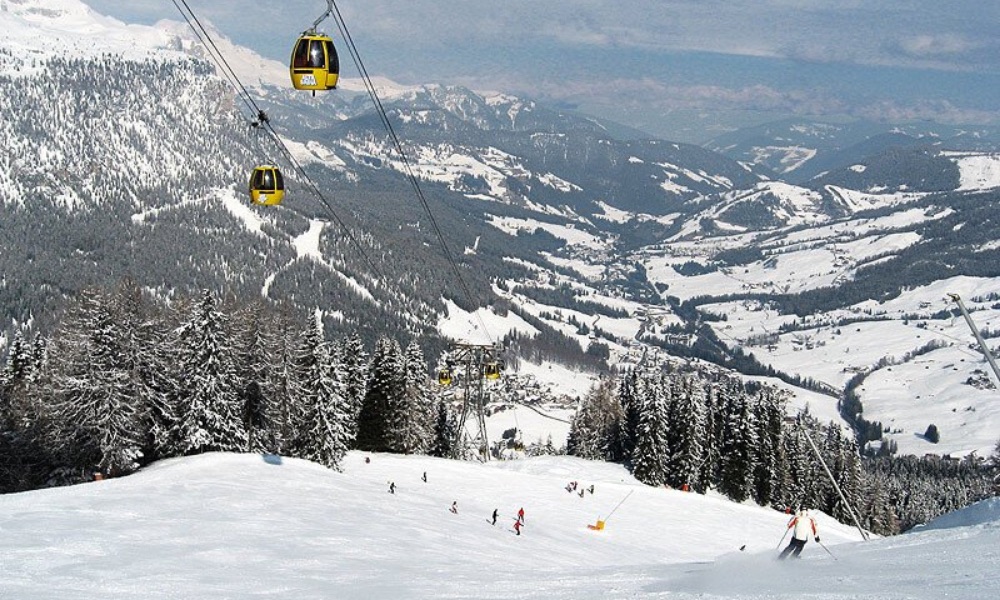 Three kilometres of track between walls, coils and fantastic landscapes. If you want to make it complete with various detours you could ski 11 km non-stop from the top of the Presena glacier at 3,000 meters to about 1,300 meters of Pontedilegno. It is better to do the whole slope from the top of the glacier and then dive into the black slope Paradiso at 2,585 meters that from Passo Paradiso goes down in a swoop towards Tonale. It is a technical slope exposed to the north with excellent snow. At the end you could take the Tonalina and go down to Pontedilegno.

Read also 10 things to do in Ponte di Legno Tonale 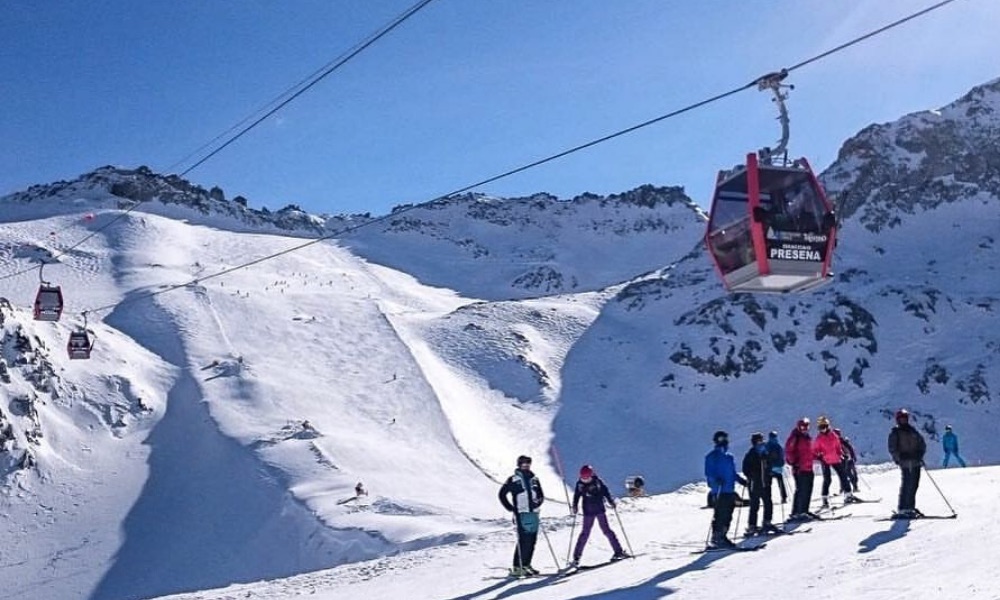 Out of classification because it is an off-piste: Canalone – Madesimo

A slope of the past, only with fresh snow, when there is, with many moguls also high and steep slopes. It is precisely this that makes it beautiful but difficult, in fact to walk it is recommended to have a good physical preparation. Once you enter the Canalone you find yourself having to overcome 3 walls and then the slope becomes very narrow, hence its name.

There is no better feeling than stopping at the bottom of the slope and watching the descent just completed. At Madesimo, looking down the Canalone, you will realize with satisfaction that you have descended from a real mountain!

Read also 10 things to do in Madesimo